Skip to content
Note to our readers: We may earn a commission for purchases using our links. Learn more. 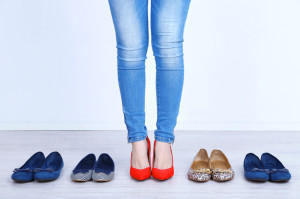 Sometimes I wish I could write about shoes.

Unlike steam irons, deciding on a new pair of fabulous pumps comes easy to me.

But that’s just it. Shoes are easy. If they catch your eye, half of your decision is already made.

Steam irons, on the other hand, can be a little bit more difficult to dig in and differentiate between, and that’s why I write about them instead.

Today, want to compare three very similar irons from Panasonic. The models in question are the NI-E200T, the NI-E300TR, and the NI-E650TR.

There is a lot of confusion over these three economically priced steam irons that I wanted to clear up. I’ve heard many stories of people deciding on one model but decide on another color, only to find out when they open the box that it’s not the same model and doesn’t have the features they wanted.

It’s an easy mistake to make. At a glance, all three of these steam irons do look the same, and anyone who didn’t carefully read the details of each one might make it.

Since I’ve already reviewed two of them, I decided it was necessary to write this article to explain the differences between all three models so others can avoid making the same mistake! 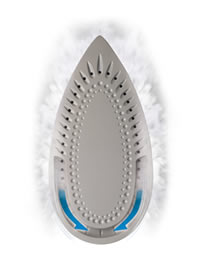 All three steam irons share several features. They all have a 1200w power rating. They all have a cap that snaps down and covers the water inlet, which will keep water in the tank and off of your clothing should you accidentally move your iron aggressively. They all have a spray feature as most irons do, and they all have the same body style.

The soleplate on all three steam irons is identical, right down to the number of steam holes. The most important design feature is a curved soleplate that takes the iron’s center of gravity from the tip to the middle to help reduce those little wrinkles that other soleplates are known for. It’s made of titanium, has a non-stick coating, and offers a sleek u-shape at the base – no corners to catch on your material as you iron!

The other similarity is that all three irons have a nice balance of good reviews from owners compared to bad.

The obvious difference is the color, but the differences don’t stop here! Though I pointed out many similarities, each model has certain features that the other two don’t. Overall, the NI-E200T steam iron has the fewest features, and the NI-E650TR has the most, but I found that depending on your ironing habits, any one of them could be a good choice.

The next section goes through the differences that each steam iron has in comparison to the others. 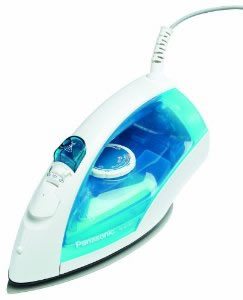 Lets start with the basic model. The NI-E200T is (obviously, according to my picture!) the blue steam iron. It’s the most basic iron with the fewest features out of the three, and the price definitely reflects that.

What does it include that the others don’t?

It has a 360° rotating ball joint where the cord goes into the back of the machine. It also weighs nearly two ounces less than the other two models.

Otherwise, it has all of the same base features that I’ve listed above. Talk about no frills!

The Panasonic NI-E200T steam iron can often be found online and in stores for around $25.

Click here to see the current price at Amazon 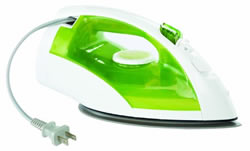 There are a few really big differences between the NI-E200T and the NI-E300TR. First, the NI-E300TR clear plastic water tank housing is a lime green color instead of blue.

Beyond that, the NI-E300TR also comes with a retractable cord instead of a cord with a ball joint connection, which I personally think is a fantastic feature.

It also has a steam-on-demand button that will add an extra burst of steam to your clothes as you iron. This same feature can also be used for vertical steaming. Because this model has this feature, there is an extra ‘Burst of Steam’ setting on the temperature selector that isn’t available on the NI-E200T.

Another important feature is the auto-shutoff feature, which the NI-E200T does not have. It’s also one of the better functioning ones out there. Not only will it turn the steam iron’s heating element off after being still for ten minutes, but if it senses that it’s been left on its soleplate or side, it will shut off after just sixty seconds.

The Panasonic NI-E300TR steam iron can be found online and in stores for around $30.

Click here to see the current price at Amazon 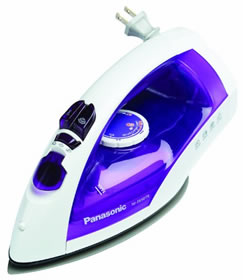 But you can add a couple of more features to the list.
First, the steam-on-demand feature can also be used for steaming vertically. This is great for quickly steaming hanging clothes or touching up drapes.

It also offers a self-cleaning function, which is a really great way to keep those steam vents clean and lengthen the life of your steam iron. To keep it a little cleaner, it also has a built-in Anti-Calcium System to keep scale at a minimum. There is no filter to replace either.

The Panasonic NI-E300TR steam iron can be found online and in stores for around $35.

Click here to see the Panasonic NI-E650TR at Amazon

All in all, any of these irons would be a good choice, but the extra features in the NI-E300TR and the NI-E650TR definitely are worth the extra money.

On a budget and need your money to stretch? The NI-E200T is a great choice if you don’t need extra features like steam-on-demand.

I personally like the retractable cord and the steam-on-demand features that the other two models offer, and if you like to steam hanging clothes, the NI-650TR would be the best choice.

Regardless of which features you feel you need, all three of these steam irons perform very well considering that they all are very economically priced!

As an Amazon Associate LifeUnwrinkled.com earns from qualifying purchases.
We use cookies to ensure that we give you the best experience on our website. If you continue to use this site we will assume that you are happy with it.Ok